skip to main | skip to sidebar

Sometimes life comes at you fast.  Days blur into weeks and weeks blur into months.  Sometimes we move so fast that we forget to stop and enjoy the little things.  A couple of days ago, I was out reading on my new patio furniture - love it - and a storm blew in.  I stayed where I was for a moment and watched as giant drops of rain fell around me.  I stretched out my hands, hoping one would land on my palm, but instead it landed directly on the top of my head.  After a few moments, the drops start coming faster.  I stayed outside, but moved closer to the back door in case I needed to bolt.  My daughter joined me.  We sat on the back porch and tried to catch rain.  Before long, we started to notice a few drops of hail.  We watched as they multiplied.  We ran inside as they pummeled us.  We stood at the back door and watched this crazy storm.  I dared my 16 year old daughter to run out and stand in the hail for 10 seconds.  We both ran out screaming "ouch, ouch, ouch".  Can you last for 30 seconds?  You bet.  "Ouch, ouch, ouch".  Who knew that a hail storm could be so much fun.  My daughter ate pieces of ice from the ground - no thanks, that where my dogs roam - yuck!  I snapped a picture in my mind.  I wish I had thought to grab the actual camera, but then I would have missed out on all the fun!
Posted by Amy Van Wagenen at 11:08 AM No comments: Links to this post 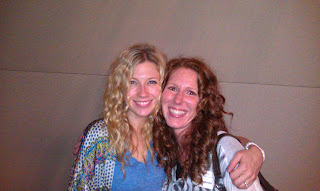 (I look way too excited - like some crazy super fan!)
Yesterday I heard Brooke White speak (and sing) at a workshop.  You remember Brooke right... from American Idol.  She was my favorite that season because - well, the hair of course - and the fact that her voice wasn't over trained and affected.  It was pure and pretty and she didn't feel like she needed to scream to get our attention.  I don't know... that's just my opinion.
I'm a member of the Soundcheck Series here in Salt Lake.  They are a fantastic "organization that helps aspiring artists - such as myself - achieve their greatest potential."  That, my friends, was taken directly from their website - word for word.  They offer these amazing workshops where you can listen and learn from people in the music industry.  It's a great place to network and meet new people.
Brooke was different than I expected (she was really tiny!).  I thought she would have been affected by all the fame and attention she received from American Idol, but she was down to earth and really truthful about the music industry as a whole.  She took time to talk to all of us individually.  She must have been there all night - exhausting.  I have a new perspective of what the music business really looks like and how much work it actually takes to be successful.  I'm pretty sure that I'm not working hard enough, so it's time to kick it into gear.  People are always asking me, "how is your music coming, have you written anything new, when are you going to do another album?"  I smile and say that I'm working on it or sometime next year or in the fall.  At this rate, I will release my next album when monkeys fly out of my butt - that sounds downright painful.  Brooke said something really remarkable.  Someone asked her what keeps her motivated to move forward.  She responded by saying "I don't know".  Pretty profound right.  But she followed it up by saying that music is just a part of her and that this is just something she HAS to continue doing.  I hear ya sista!
I hear songs in my sleep, I create melodies in the shower, I find lyrics in reality TV - who does that.  It's just a part of me and the more I try to put it off, the more frustrated I become.  I love the songs that I am creating lately.  Some are fun and quirky and some come straight from my gut.  Some jump onto the page and others are painstakingly emerging over days or weeks.  Some I love and some I will probably throw away.  But the point is, I'm writing and loving it.  Will another album be out in the fall - not likely.  In a year - hopefully!  I just need to get all my ducks in a row (or as Brooke put it - eggs in a row - huh?!) I'm grateful for great examples in the music industry that motivate me and empathize with me - including the super talented Brooke White.

Amy Van Wagenen on iLike - Get updates inside iTunes